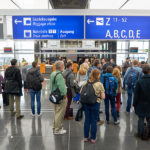 Recently, there was a story in the news about a TSA agent who was suspended from his job after he was observed using his phone to take up-skirt videos of unsuspecting women in the airport where he worked. After his supervisors were tipped off to this behavior, they observed him secretly recording women as he stood behind and beneath them on an elevator. Remember that this was happening at his place of employment, and while he was still in his work uniform.

I immediately felt horrible while reading this story for several reasons. First, I was reminded that women can never truly consider themselves safe anywhere. After all, if you're not safe with agents working in an official capacity, then who are you safe with? Secondly, I’ve met and treated men with this predilection, and each of them were sex addicts and voyeurs.

There is a fundamental disconnect present in the men who exhibit this kind of sneaky and invasive behavior. To them, sex begins by looking up someone's skirt. There is no consent, no intimacy, and indeed no connection whatsoever required. It's an empty and lonely state to be in, but their compulsion is so strong, they can't seem to stop.

They have fetishized one particular attribute, and will stoop to any level to get their eyes on it. I've treated men who have admitted to standing under open staircases, or even putting cameras on their shoes to get a glimpse up the skirts of unknown women.

Sex Addiction is About Objectifying People

You may be reading this story and thinking “Well, I would never do anything that risky or stupid,” but I would stop you there, and remind you that sex addiction is a progressive disorder. Many of the men I work with come to me precisely because their behavior – which they believed they had under control – got too extreme. I see it happen time and time again.

In effect, what these men are doing is deconstructing women down to a collection of body parts. Hopefully that statement sounds distasteful to you, but to a growing number of men, it sadly makes perfect sense.

Many of these men come from homes where intimacy, connection, mutual respect and love were not modeled to them. We all learn from our parents and guardians, and just like the men I work with came from dysfunctional homes, I would bet that this TSA agent had a similar upbringing. Was there any guidance there? Did he ever get the chance to see the benefits of a long-term, caring relationship, or did he only learn that sex felt good?

A child growing up in an environment without love and affection is more likely to begin objectifying women. Children today have it especially rough, because our media and advertising focuses on sex and body parts more than ever before. Without a strong foundation to build on, these young minds will begin to fragment. Sex becomes separate from all feeling and connection.

This is how we wind up with unsuspecting women – real, live human beings – used as objects to fulfill the sexual desires of a stranger. A stranger who has mentally normalized his behavior so much, that he doesn't fear doing it in public, or at work.

You see, the addict is a regressed part of you. It's a child sneaking into a cookie jar even though he knows he's not allowed to. His compulsion is so strong that it overrides any fear that he might get caught. The addict wants what it wants, and it will put you in all sorts of precarious situations to get it. Logic, common sense and decency all go out the window - that's how strong a grip this behavior can have on you.

Time for a Gut Check

In a way, this story is actually a great litmus test for those of you out there reading it. Do you find this TSA agent's behavior funny? Are you sitting there right now, rationalizing how you would do a better job of concealing that camera? Are you waving away the humanity of the women who were victimized?

Learn from this example. If you have a compulsion to act out sexually, it will never stop until you address it. You'll begin acting out in public, you'll act out at work, and eventually, this behavior will be what ruins you.

You can stop this before you become a headline. You can reach out for help right now. Contact us here at Compulsion Solutions, and together we can work toward turning your life around.