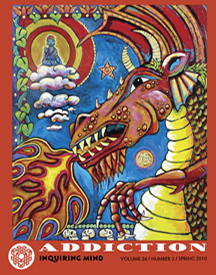 In the land of the strange but true, as a former Tibetan Buddhist nun I fell in love with and married a man who counsels sex addicts and who is a recovering sex addict himself. Joining him in his counseling practice has allowed me a look into the lives of many people who have struggled with sex and relationship addictions. These relationships have also impelled me to contemplate how the grace and teaching that I received from my Tibetan teachers can supply guidance in how to work with the compulsions and addictions that manifest in our world today.

Earlier today we received a call from a very successful local businessman whose wife had once again discovered a number of sexually explicit text messages and emails on his cell phone. These messages had been sent to and received from friends of the couple, acquaintances, business associates and prostitutes. His wife was prepared to leave the marriage because she had discovered this sort of evidence previously, and he had promised “never to do it again.” Could he be helped?

A woman, a successful attorney, has been working with us because she realized that for the last ten years she has remained in an abusive marriage due to her fear of being alone.

What is it that creates a compulsion to have sex as often as possible? Or to fantasize about sex with an individual of an inappropriate age? Or to compulsively fear being alone, to feel compelled to “be in a relationship”? Why have otherwise reasonable and educated people continued to make choices that lead to greater suffering for themselves and for the people closest to them?

So how can meditative practices and insights help us work with such compulsive and limiting sexuality? Through the years of my practice and work, my thinking on these themes has evolved, informed by wedding the wisdom of traditional Buddhist teachings with the wisdom of Western psychological models.

Western science teaches that our desire to survive, to protect ourselves, to avoid pain, to feel good, to just be happy is wired into the core of our biology. The urge to connect with another being is also natural; we are social animals and quite naturally require human connection at a biological level. This urge for connection seems to me to mirror our urge to reconnect with the truth of who we are. At the heart of Tibetan Buddhism is the instruction to look to the core—to the “who” that is observing. The truth of who we are is the peace we recognize in a moment of meditation when we disconnect from our usual awareness of thoughts, in a moment of undefended love, in a transcendent moment in nature, in a newborn’s eyes, in the moment before we drift off to sleep.

Buddhist teachings point to how each of us can learn to work with urges that have become compulsions or addictions and that don’t serve ourselves or others. By bringing such urges into the light of awareness, we can watch them arise as signals of something seeking our attention. At that point we can determine how to respond—or not. First, we can notice that when uncomfortable, painful feelings arise, our animal instinct may interpret them as threatening, and our biochemical imperative may try to take over. We may have a tendency to strike out in anger, to run away or numb out in fear, or to seduce the perceived dangerous entity to protect ourselves from peril. Secondly, we can realize that suffering is a natural part of human existence. This is a basic tenet of Buddhist teachings. Every one of us will experience loss, disappointment and betrayal. We cannot avoid suffering, so how can we learn to navigate the waves of discomfort when the urge to engage in compulsive or addictive behavior arises? How can compulsion serve as an ally?

Sometimes we use activities such as impersonal sex or being in unhealthy relationship as an avoidance of painful experience. The obsessive need for sexual release or the fear of being alone is simply a mistaken expression of the very natural urge we all share to find peace, to return “home.” Instead, we can become more and more willing to fully experience our urges as energy, and we can learn to stand right in the middle of the discomfort. In 1988, when I was visiting Kalu Rinpoche in India, he said, “When an enemy arises in your life, even though you may kill it, another will simply arise, because all arisings are simply a manifestation of your own state of consciousness.” I still remind myself that it won’t do any good to banish the feelings inside of me that I don’t like and don’t want to have anymore. All we can ultimately do is turn and face the perceived enemy.

In working with uncomfortable feelings, the only antidote is turning, facing, fully experiencing. When dealing with those places that feel deeply wounded, fully engaging with such feelings can take some time. But eventually, we gain enough perspective and increase our capacity to feel the feelings we’ve previously worked so hard to avoid. We learn that the energy of these feelings will not destroy us. On the contrary, they allow us to experience the truth of ourselves in a more profound way. A moment during which it seems we cannot bear the discomfort is precisely the moment of opportunity, the doorway to experience a feeling simply as energy, as a force that has arisen. This is how the seeming enemy becomes an ally.

Those who experience sexual or relationship compulsions (in whatever form they may take) may also suffer from shame in response to our society’s stigmatization around such tactics of alleviating or avoiding suffering. Instead of shame, what’s required is compassion—not as license, but as kindness and empathy born from the understanding that each and every one of us, including you, has our own particular strategies of protection and avoidance. We can finally come to see that our most “shameful” challenges can be held in tender compassion. From this compassion, our hearts can hold all suffering.