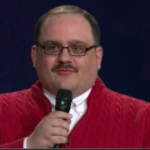 If you watched the second Presidential Debate, you probably noticed a man in a red sweater by the name of Ken Bone. He is a worker at a coal manufacturing plant, and he had a question about energy conservation. His pleasant manner immediately endeared him to audiences all across the country, and almost as soon as the debates were over, Ken Bone was trending on Twitter. He had become an internet meme just like that.

So it probably won't surprise anyone that within just a short time of Ken becoming internet famous, he had an offer from an adult film company to appear in a video. Now, the company was careful not to say what they wanted him to do in that video, but adult film companies tend to stick with what they know.

Some fast food restaurant commercials are notorious for showing beautiful models eating hamburgers in a suggestive way. I have a colleague in the psychology industry who was contacted by restaurant advertisers, because they wanted to know how the ketchup should drip onto that model to get the biggest response from the audience. This is the level to which you might be manipulated by companies trying to sell you sex.

To someone with an addiction, these ads or trends become triggers, keeping them in a repeating loop of compulsive behavior.

Of course, I would be remiss if I didn't mention the recent info coming out about Ken. It's been discovered that he said some unsavory things on his Reddit account about Jennifer Lawrence, and even about the Trayvon Martin case. I don't think it's his fault that he turned out to be a regular guy, even though Twitter had him built up as some kind of super sweet, innocent man. Everyone has a shadow – if you don't believe me, go out in the sun and look down.

You Need to Fight Fire With Fire

Companies design this kind of publicity because they're looking to shock and catch people off guard. They want you to be so curious that you can't resist logging back on. We design our program to combat this invasive advertising, as well as other triggers which keep pulling addicts back.