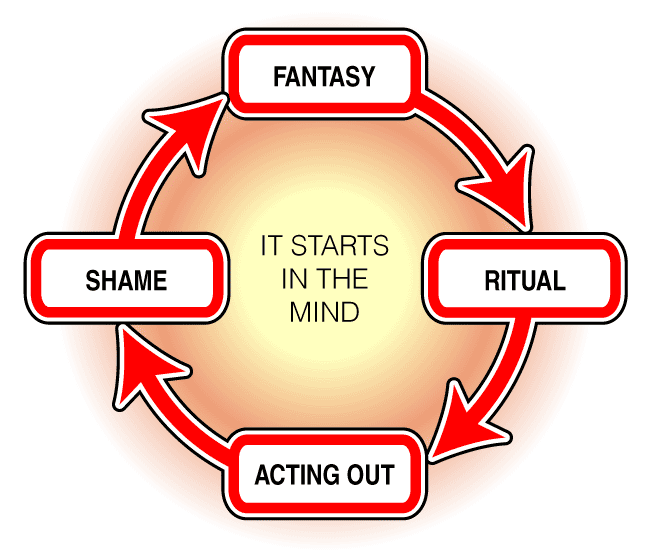 I teach my clients to do this through the use of a technique called dialog. In essence, I get guys to talk to themselves. I know this might seem wacky. If fact, men have said to me, “If I talk to myself I’ll go crazy.” I say back, “No my friend, if you talk to yourself, using this method, you’ll go sane.”  To show you the possibilities of using this dialog technique here is a revealing “conversation” my client David wrote talking back to his addict personality, “Playboy D.”

Playboy D: Did you see that teller at the bank today?!

David: Yeah I saw her, what about it?

Playboy D: She had that blouse on! Her tits were amazing.

Playboy D: SO?! Let’s flirt with her, no even better take that wedding ring off and let’s ask her out!

Playboy D: Shut up, let’s do it! Don’t think about it, forget all that therapy crap and let’s just act on this instinct, you won’t regret it. You will regret it if you don’t!

David: History tells otherwise. Why are you objectifying this woman?

Playboy D: I’m not objectifying her! Let’s have some fun! You can be charming and sweet if you want. I’m sure she’ll like that. Probably eat it right up.

Playboy D: DUH! Getting her naked! I know you want to play with those huge boobs!

David: So the end goal is sex huh?

Playboy D: I’m not going to sugar coat it for you, I mean come on, be honest here. Put the good guy crap away, you’d love to fuck her! YOU KNOW YOU WOULD!!!

David: No I wouldn’t. You do realize she is a person right? With feelings, desires, needs, wants? She’s not just a hole waiting to be filled. Did it ever occur to you that she wants love and intimacy with someone. That hiding the fact that I’m married and getting involved with her (which we have no idea if she’s married or involved) would really hurt her in the long run.

Playboy D: Forget all that crap, this is the desire and let’s fill it.

David: You know just because you want to forget the reality of things doesn’t make them go away. The fact and reality is that I’m married, have two beautiful children, and a great life. Why would I mess all that up for sex with a girl I know nothing about, and actually do not believe would have sex with me anyway.

Playboy D: Well let’s find out! Give it a try.

Playboy D: You can’t say NO to me! I know you and you want this.

David: No I don’t, and there is no way you KNOW me. You aren’t me, and I am not you, but I can SEE what you’re doing. What’s going on here? Why are you wanting to act out so bad?

Playboy D: I don’t know what you’re talking about. I’m just being me.

David: No something’s going on here. We’ve seen this girl before, all be it in more conservative clothing, but this time you show up and are really pushing for this.

Playboy D: Well I mean you’ve been stressed out, feeling a little low and disconnected from your wife, haven’t really had any ‘you time.’ You deserve this and it’ll make you feel better.

David: The chase, the flirting and anticipation would be fun and exciting, even the sex would be intoxicating, but what about after? Guilt, shame, pain and suffering to follow. It’s right there on the label.

David: The label, it’s on the side of the sexual addiction. You’ve never seen it?

Playboy D: NO! What are you talking about?

It’s on the side of every sexually unfulfilling avenue. I can’t believe you’ve never seen this.

Playboy D: Well, I mean who came up with that? Doesn’t mean it’s true.

David: It is. Ask anyone who has done those things. They’ll tell you the guarantee is completely accurate. Probably the most accurate guarantee ever presented. So do you see why I have no interest in pursuing that girl? It just ends with the guarantee.

David: yeah, wow. So what else can we do?

Playboy D: What do you mean?

David: Well you’re “Playboy D.” You like to “Play,” how else can we play that would be beneficial instead of hurtful?

Playboy D: Go for a run? Hang out with some of the guys? Fly fishing?

David: Sure! Those are great ideas, and has a much better guarantee of feeling great at the end!